Here’s a clip of Quentin Tarantino discussing the type of ‘infected people’ in the film Planet Terror. At about 2:01 into the clip, he reveals how he likes to score his films and why he rarely employs a composer.  He does, however, love the old film soundtracks and songs.

For Reservoir Dogs, he used some great minor hits from the ’70s. The radio is playing in several areas and the station tuned in is having a flash back weekend.

If you’ve seen the movie, one great song should make  you cringe, forevermore, while another will always make you want to strut. I’m going to be a chicken and advertise the strut, in this article. Here’s another  version of Little Green bag that is about :45 longer than the version on the soundtrack. Tarantino did what he needed to fit the song into the film’s credits . I happen to like this clip with band, George Baker Selection. Of course,the soundtrack also includes the Steven Wright intros to the songs, the Madonna Speech and Let’s Get a Taco, where Mr.White explains how to get information.

Turntabling has a vinyl LP copy of the Reservoir Dogs soundtrack for sale–first come, first served.

From time to time we get more Tarantino soundtracks, but they tend to sell out fast. Mr. Tarantino has a fine hand merging visuals and music, bringing new fans to some of the old masters. 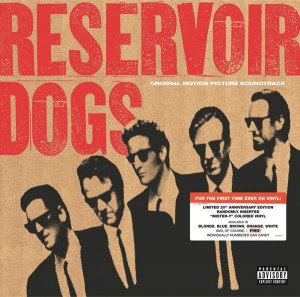 Roberto Pregadio, one of the great composers from the Kriminal soundtrack adds an incredible  music for the soundtrack to the movie Il Medico…La Studentessa.

A man and a woman look surprised by circumstances around them. The fellow is adjusting some of his clothing. The woman is topless and the rest of her garments are sheer.

As a CD with artwork that’s not safe for most workplaces, Commedia Sexy All’Italiana has some lovely soundtrack selections that shouldn’t be overlooked. There are twenty tracks from the late ’60s and early ’70s. It also has a booklet showing scenes and posters from the original movies.

In the ’70s film makers worldwide turned to sex to sell movie tickets. The Italian film producers employed the same composers who added jazzy excitement to their western and horror genres to score the comedies where the women shed their clothing and the men became hot and bothered.

This collection shows that the music added to the comedies whimsy, passion and naughtiness. The tracks stand out with a sexiness all their own. Commedia Sexy All’Italiana might not be safe to play at work, without the headphones and a cover for the lady on the case. These tracks would be great for your collection of inventive film soundtracks and additional sexy swing to any party or dance floor.
Turntabling has a CD copy of Commedia Sexy All’Italiana for sale at our Discogs store. It is, of course first come, first served. 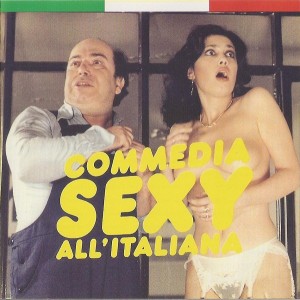 I don’t know whether Barnie is a real person, but this collection of tracks with his name certainly does a great job of presenting some classic ’70s memories.

Compilations are great for long drives and busy work, when they’re done right. If you’re looking for energy, action, with a lot of soul, and a touch of lounge, The Mood Mosaic 2: Barnie’s Grooves is something you need to know.

This 16 track Italian Import, from 1997, has original television and movie soundtracks along with funky jazzy contemporary versions of familiar tunes.  They work together to create an hour long experience of action and nostalgia for great movies and television.

We at Turntabling fancy the  two tracks from a Yorkshire TV action series, The Hanged Man, that close out the CD.  These are high energy tracks from a ’70s television series new to us. We’re seeking out this one season show, because the music is so enticing.
Turntabling has a copy of the CD of The Mood Mosaic 2: Barnie’s Grooves for sale on Discogs –first come, first served. 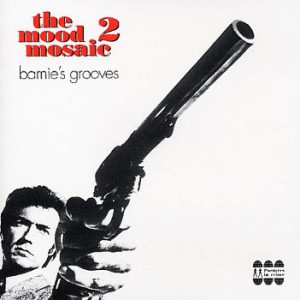 Popshopping Volume 1 is a collection of German advertising soundtracks from the late ’60s and early ’70s.  Lovingly presented, over 30 years after they sold the wares, the tracks are now prized as nostalgia  and sonic art. They are not lost to time. By being catchy and memorable, these  jingles and background tracks led consumers to the sales counter (Moulinex is a kitchen appliances brand), the store shelf and beyond. The auto showroom was a frequent path in advertising then and today.
Sometimes these commercial soundtracks showed an affinity for tunes that brought the masses to movies of the day. The track below is reminiscent of a famous theme from the ’70s.  Action cinema orchestration used to sell cars?  What a surprise!
Turntabling has a mint copy of the double-vinyl LP of Popshopping Volume 1 for sale . This is a limited edition release  from 2000. This item is first come, first served. 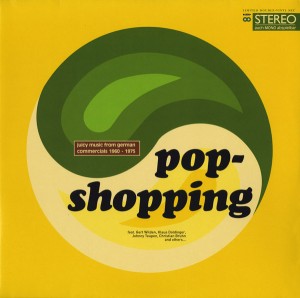