The Rolling Stones album Sticky Fingers was released in America with a cover designed by Andy Warhol, the iconic “zipper” cover which originally had a real, working zipper.

Warhol biographies say two models were used to shoot the cover image–the zipper unzips to reveal another crotch clad in boxer shorts–and nobody was definitively told whose (covered) junk it is. Hope that doesn’t keep you up at night…some sources say Warhol actor Joe Dellasandro and Warhol boyfriend Jed Johnson are the crotches in question.

But for the Spanish release of Sticky Fingers, a less “pornographic” cover was required…so what THOSE lucky stiffs got was this vaguely Burroughsian (to me) cover… 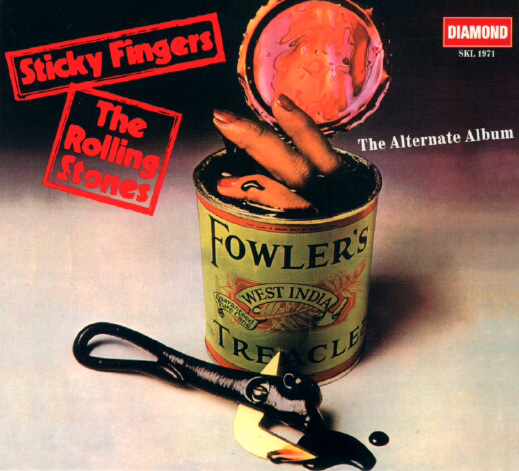 The original Spanish edition of Sticky Fingers, in addition to the alternate cover art, omits Sister Morphine (can’t imagine why, heh). Some sources say the Warhol zipper cover had its problems in some American chain stores because of the prominent outline of the model’s junk.

Seeing a prominent bulge in a pair of jeans was apparently was enough to send some uptight dingbats into a frenzy of moral outrage. People were dumber back then.