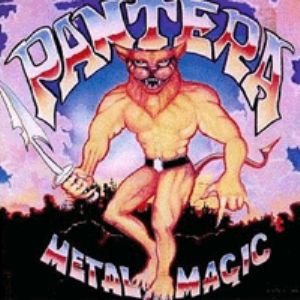 I admit it, I have a thing against a lot of the hair metal and post-hair band metal albums. Let the reader beware, it all sounds like the Cookie Monster with a backup band to me. With that caveat in mind…

Once upon a time, the name Pantera was synonymous with large music industry dollars…or so it seemed, anyway. They were EVERYWHERE. You couldn’t see for the forest of Pantera concert shirts, and if you asked anybody in a truck stop ANYWHERE what they listened to, it was inevitably, “Payanterrra”.

Where are they now? Who cares? To some of us, this sort of record sounds like this:

[ad#Google Adsense]
That aside, it’s stunning that a band that, for however long (or not) they were in command of metalhead spending habits (or maybe they were all Beethoven-loving Rhodes scholars for all I know) they were still able to slip crap like THIS onto the market.

Feast your eyes on that wretched fan-art quality album cover–it looks like it should be stenciled in India ink on the back of a denim jacket stinking of diesel and moonshine, not an LP or CD cover.

And do my eyes deceive me, or is this bizarre creature not actually wearing any pants? There’s some kind of Wrestling Federation prize belt, but that’s it. What a strange, genderless thing to be plopped down on the middle of this album cover.

No doubt the death threats will come rolling in now that we’ve had the gall to make fun of a group as “bitchen” as Pantera, but let the chips fall where they may. We’re in Chicago, far away from the haystacks and tractor rides where the death-threat inclined tend to live.

Rock on, hesher dudes…but leave the album artwork designs to the professionals, hey?