Browsing the Trailers From Hell collection, I noticed this gem of a program with director Larry Cohen about his film, Black Caesar.

Larry Cohen is a Turntabling favorite. He is a unique screen writer and director. He is famous primarily for science fiction and terror titles (It’s Alive, The Stuff, God Told Me To, and Q). We were luck to even meet him once.

The soundtrack is by The Godfather of Soul, James Brown. If you’re a fan of Godfater Brown you probably have this in your collection. Isn’t it time for a new LP copy? If you don’t have it, you need to take a listen.

This soundtrack has some epic tunes, including this one that starts off the album, (after the commercial) Down and Out in New York City.

Another track that found recent love courtesy of The Lock, Stock and Two Smoking Barrels soundtrack is The Boss. Try not singing this to yourself after you hear it once. I dare you. The clip has an advert that you can skip in 5 seconds. Another great song on the soundtrack is performed by Lyn Collins. Here she is at her soulful best with Mamma Feelgood (after the advert that can be skipped). Turntabling has a copy of the vinyl LP soundtrack reissue of Black Caesar for sale. It is first come, first served.

We love this one, we’re confident that you will too! 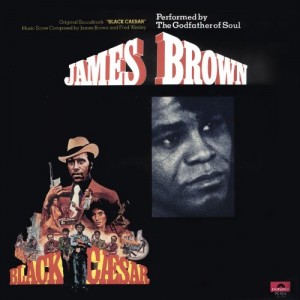