by Joe Wallace
True story. Back in the 1990s, I was an enlisted Air Force member working as a military broadcaster. I was stationed at Misawa Air Base in nothern Japan, and during that time I did my share of radio and television news, production, and and radio shows…for the military.

Overseas bases like Misawa, and many others were considered “accompanied tours” which meant you could bring your family with you while you worked through your two or three-year military assignment there. The idea behind having a local radio and television network was that AFRTS was bringing “a touch of home” to the pre-internet bases as a morale builder. It worked. There were time-delayed sports events, satellite radio, and local programs. There were no commercials, since it was (and still is) a government-run network…but there were PSAs that everyone made fun of even as we sat and watched. It was the only game in town!

In Japan, the thing I was most proud of in the early days was my one-day-a-week stint as the head of Joe’s Exploding Zoo- a radio show featuring any then-labeled alternative music I could get my hands on in an official capacity-we were only allowed to play records and compact discs that had been copyright cleared via the American Forces Radio and Television Network’s procurement department back in California.

The compact discs were via Century 21, which I was already familiar with having worked with those discs as a civilian DJ in Illinois. Century 21 provided compilations to subscriber stations with the latest format-specific music charting at the time, plus oldies and supplemental discs. But the vinyl for our military radio shows came from AFRTS itself.

And it was, compared to what you’re used to from vinyl records, fairly unusual. AFRTS vinyl was usually an album side featuring one artist, and an album side featuring another artist. Sometimes you might get an entire record on sides A & B, but more often than not, it was combos-you might get The Pet Shop Boys on one side, and Soul Asylum on the other. They were not the actual releases from the record companies themselves, but rather a shipment of AFRTS-label vinyl with those cuts: 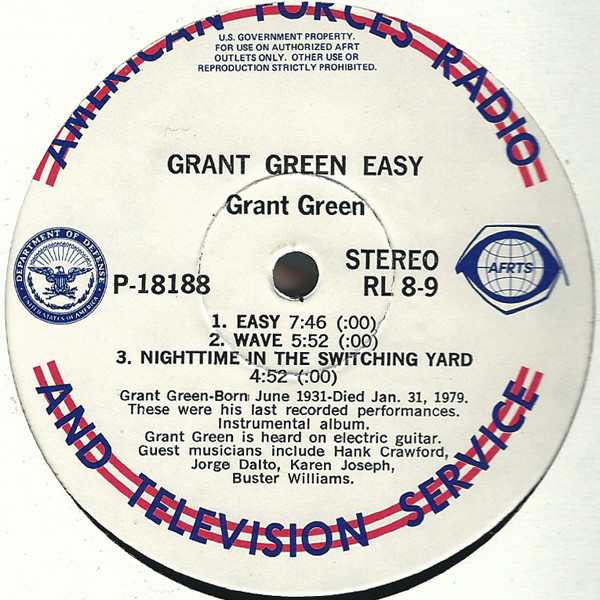 The record library was MASSIVE. Approximately ten thousand records massive, all catalogued, labeled as you see above, and properly stored. And in spite of not being plugged into the whole of recorded music, the collection was surprisingly eclectic.

As a snotty 20-something punk/goth/industrial/noise/etc. troublemaker, I actually found enough music to run a two hour show with once a week. Depeche Mode, Sisters of Mercy, Devo, and many others were all represented one way or another on vinyl, but also lesser known groups like Single Bullet Theory (who pre-dated Single GUN Theory, I might add), The Burning Sensations (notorious for their entry on the Repo Man soundtrack), and some mildly edited-for-content Frank Zappa just to name a few.

But one day, it was decided that vinyl did not have a place in the AFRTS operation any more (thanks for nothing , digital) and because of copyright issues, all stations were ordered to DESTROY THEIR VINYL COLLECTIONS.

And so we get to the video below, also produced by military journalists stationed overseas at Iraklion Air Station in Crete, detailing the utter horror that is the mandatory destruction of 10,000 vinyl records at JUST ONE STATION. They found a suitably violent way to deal with the job, which you can see for yourself as long as this YouTube clip remains available.

I could write endlessly about my experiences as a military DJ and reporter, but those are stories for another time…