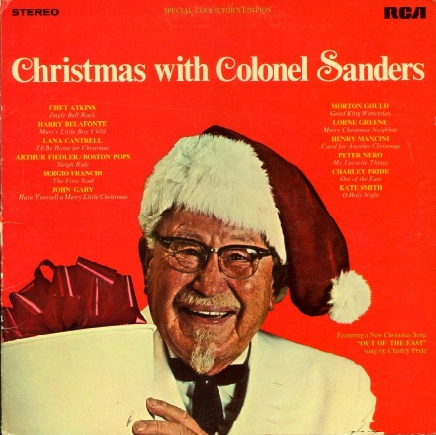 I’ve been eyeballing this album for weeks, and finally bought it yesterday at Laurie’s Planet of Sound in Chicago. I finally broke down and bought this because of the burning questions the album raises for deep thinkers like me.

“Who the hell wears a sting tie?” and “Fried chicken for Christmas?”

Most importantly, “Do I really need to have the leering face of Colonel Sanders peering down at me at 3AM on Christmas morning? Complete with that ‘let’s open presents’ gleam in his eye easily mistaken for the more sinister ‘don’t tell your parents we’re doing this’ leer…”

I am afraid to put this record on the turntable–buried in my sleep-deprived brain I am sure there are coded instructions that will activate some sort of post-hypnotic suggestion telling me to chop up the neighbors for firewood and to make festive sausages out of goldfish–the fish, not the crackers.

The Colonel doesn’t seem to sing on this LP, which is a kindness, really.

I imagine his voice would sound like a cross between a drunken Anthony Hopkins in his best Hannibal Lecter moments and Vincent Price whooping it up on nitrous oxide.

In other news, I’ll likely be featuring this LP in a spoken-word rant at an open mic night near you sometime soon. Vinyl Road Rage V might be crammed full of appearances like that, stay tuned for announcements on that…