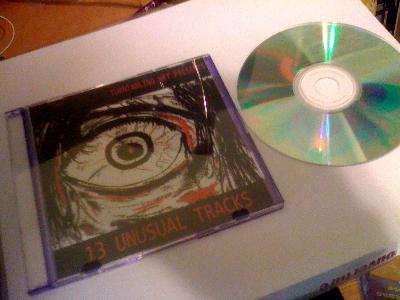 That’s an iPhone photo of the CD we’ll be giving away tomorrow to some lucky attendees of Chicago’s annual Flashback Weekend, a longtime horror convention staple in the midwest. Turntabling doesn’t have a booth at this one–next year, perhaps after we’ve scoped it out this year–but we will be hangning out at the Kitley’s Krypt booth with a stack of these VERY limited-edition promo discs for Turntabling Records.

These will go very quickly if the performance of the last promo disc, Turntabling Presents 12 Spacey Favorites is any indication. We gave away 30 CDs in no time at all at the Music Box Massacre recently and we fully expect the new promo, Turntabling Presents 13 Unusual Tracks, to be just as popular. These are NOT for sale–they’re promos and therefore totally free. But they’re also a limited edition and when they’re gone, they’re gone for good.

13 Unusual Tracks features another grab bag of odd and rare sounds, including a never-before-on-CD Post-Mortem Telepathy Vs. Pink Floyd mashup, plus some brand new Paisley Babylon tracks unheard and unreleased until now…these won’t be on the promo release for the new vinyl record, either.

13 Unusual Tracks is packed with soundtrack/Morricone-esque sounds, plus some very trippy, spaced out material sure to lull you into a state of near-hallucination. Listen to this disc in the dark, if you’re one of the lucky ones to get it. For the rest of the world, stay tuned as a special promo collection (with different tracks, naturally) for YOU is coming very soon.

Join us this weekend at Flashback. It’s located at: