The Star Wars movie (and, of course, soundtrack) knocked our socks off.  It took the audience to a different galaxy. Most of us want to go back, again and again.  Play the soundtrack when you want a favorite that will bring a smile to generations of people in a room.

We are pleased to see the recent release of behind the scenes photos of the first three films. These snaps were collected and brought to light by actor Peter Mayhew . They show the cast an crew having a wild time on the sets of the future classics.  They also reveal some inventive tricks that the film makers used to amaze us in the theaters.

Turntabling loves a great collection of photos and memories.  With luck Mr. Mayhew, other actors and crew involved have more fantastic nostalgia to share about their times on these iconic films.

Turntabling  often finds some great vinyl related to Star Wars. One of our favorites for sale includes the 1977 picture disc below. It includes the words and music from the movie and a menacing picture of Darth Vader for side two.  It is first come, first served. If you’re interested, please check out our Discogs store. 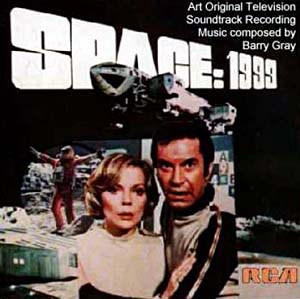 Paul Durango’s fun blog features this vinyl soundtrack from Space 1999, the least scientifically accurate of all the science fictions television to come out of the cheesy 70s.  Durango found the album, and offers a zipped digital version for your listening pleasure. The soundtrack is full of cornball 70s wah-wah guitar playing, moody atmospherics and the requisite sighing string section and echoey xylophones. You could download a whole mess of Barry Gray’s Space 1999 soundtrack music from Amazon, but do yourself a favor and check out Paul Durango’s post first.

On a side note, some of the reviews for the CD/download version of the soundtrack are almost as funny as the series itself. One breathless reviewer gushes, “Our composer Barry Gray writes powerful cues that will make any youngster and adults alike leap for joy.”

Leap for joy? What the hell is THIS guy taking? I want some.

Behold the pure 70s style queso of the original intro. Revel in THIS cornball nonsense–still great for laughs after all these years. You really need a six pack or some kind of plantlife to properly enjoy this, but this is the epitome of 1970s boob tube-dom in all its’ hilariously wretched excess. I mean, really–the main conceit of this show is that the moon has been knocked out of its orbit and is sailing through space with 300 people living on it!