Never mind how appallingly, redneckity-sexist this album cover is. Forget about how stupid the album cover concept might be, and dispense with all your well-founded objections over it being simple-minded and flat out DUMB. Just for a second.

See if you can guess what kind of a record this is just by looking at that idiotic “please laugh at my jokes” expression on Rodney Carrington’s southern-fried face for a moment. 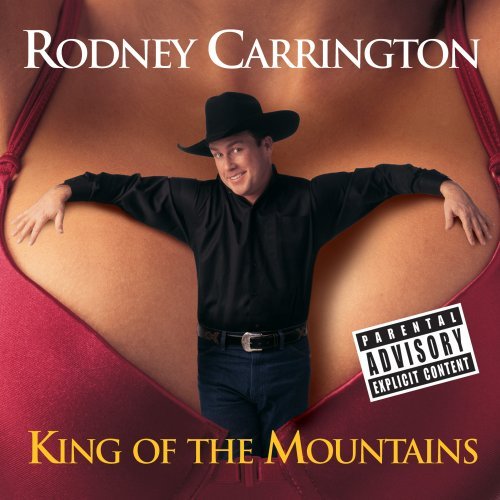 That’s right, kids, Rodney Carrington is perched on a woman’s breasts in order to sell his particular brand of “comedy”, which seems to entail a sort of sub-Jeff Foxworthy redneck-in-the-city schtick, complete with an “aw, shucks” delivery in the most contrived tractor pull accent he can muster.

And to make things worse, he’s a SINGING comedian, too. Oh, lord, please kill us all now in a torrent of nuclear fire so that we never, EVER have to endure another listen to this crap. It’s not just funny, it’s offensively not funny. As in, these jokes are so stupid you’ll actually get offended that someone is trying to sell an album full of them.

Effing HILARIOUS, to somebody somewhere, probably. But not anywhere near an area with a population greater than three.

Don’t get the wrong idea–we’re not in favor of whitewashing comedy in favor of an all PC landscape free from anything that might be “wrong”. Transgressive humor is funny because, well, because it’s not supposed to BE funny. But there’s a big difference between pushing boundaries and brick-in-the-face DUMB, which really gets the hackles up for certain writers who discover these things while idly surfing the internet for bizarre recordings.