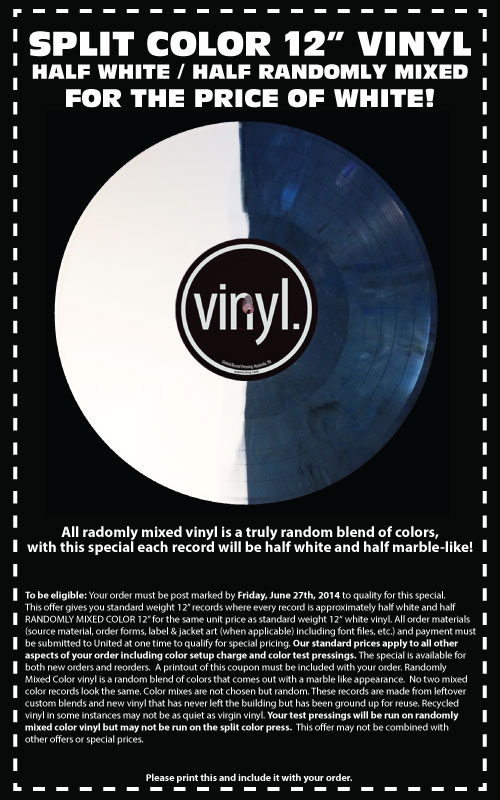 That coupon you see here is from United Pressing, the record plant in Nashville Tennessee. When Ars Technica reported earlier this month that United Record Pressing was expanding its operation to move from 30 pressing machines to 46, it included a tantalizing factoid about the growth of vinyl and how record sales are recorded and reported:

Nielsen’s SoundScan reported that 6.1 million vinyl records were sold in 2013, up from 4.6 in 2012 and under 1 million in 2007. But as The New York Times reported last year, “manufacturers, specialist retailers, and critics argue that SoundScan’s figures represent only a fraction of actual sales” and perhaps only account for as little as 10 to 15 percent of total vinyl sales, because Nielsen tracks records sold, rather than records pressed, and many vinyl manufacturers don’t print bar codes on their record sleeves, so sales from independent shops that don’t report to Nielsen don’t get counted.

If you have ever wondered about the hows and whys of vinyl records as a viable business–and I don’t just mean selling them–that quote says a hell of a lot.  For most businesses, tracking sales and recording related, relevant data is a big part of critical decision making that helps the business survive. But what can you do when the most basic business intel is incomplete?

Well, if you’re a record vendor, the answer is “make a profit”. Vinyl ain’t your typical MBA-run industry.  (It’s actually pretty lazy writing to classify an entire marketplace as “vinyl”. But you know what I mean–the business of recording, pressing, selling and promoting music on a physical record.)

That’s actually one of the most appealing things ABOUT vinyl–the fact that a nice little chunk of the business isn’t subject to the usual corporate nonsense. Of course, there are people who will try to shove the square peg into the round hole and force our beloved vinyl business into some kind of rinse, lather, repeat model. But thanks to indie retailers and what seems to be a general allergy to that sort of thing among musicians and record sellers alike, we keep getting news stories like the Ars Technica piece.

Though I will say, bar coding DOES make tracking your inventory a hell of a lot easier…