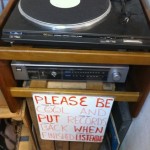 Was a great, sleep-deprived and vinyl-riffic road trip to Pittsburgh and back again. Loads of great vinyl finds and good times, and the two-day horror movie marathon and camp-out at the Riverside Drive-In was awesome fun. The normal Turntabling posting schedule (such as it is) resumes once more now that I’m off the road.

Learned a few interesting things about my own vinyl collecting habits while on the road. Maybe it’s just personal bias in favor of one system over another, but I find vinyl graded with terms other than the Goldmine standard (G, VG, VG+, NM, NM-, M) seem to be MUCH less than advertised when you inspect the records.

“Very Fine” and “Exceptionally Clean” seem to be much closer to bullshit in my opinion–“exceptionally clean” or “very fine” lead one to expect a record in at least VG+ or NM- condition. Instead what you get in many cases is an overpriced VG.

What’s the difference? I know a lot of people out there have a hard time with record grading, but my own criteria, fussy as it may be, is basically this: if a record has more than a couple of stray marks on it, it can’t possibly be better than VG+. If a record looks used, but well taken care of (shiny, without more than two glaring marks or scratches that don’t affect play) it’s probably VG or VG+. I think records in VG+ condition are great purchases, and many of the ones in my own collection are VG+.

I will buy a record that looks VG+ any day of the week. I love NM vinyl best of all the “pre-owned” grades, but sometimes you’ll pay more for them because they’re more sought after–a NM version of a rare title is a wonderful find. But VG+ is just fine for anyone who plans to play the record often.

Near mint is just that–a record that’s used but looks pretty damn close to when it came out of the shrink wrap with some leeway given for the age of the record. Mint is either just out of shrink wrap and played once or twice or still sealed. In my experience–and it’s all VERY subjective, naturally==I think people who collect are really into NM, but many of those who buy from me at shows like HorrorHound Weekend or Cinema Wasteland buy to play the albums often and are perfectly happy with VG+ or VG.

The records graded “Very Fine” or “Exceptionally clean”, I’m not too impressed with as the perception is (for a hardcore record buyer and seller of vinyl) that somebody’s trying to sidestep the condition issue. That’s not always the case, to be fair, but it was really glaring on this trip how untrustworthy grading systems can be. Always inspect your vinyl!

I’ll have to do a full post on this stuff a bit later on, methinks.

Big thanks to all who came out to the Turntabling Table this weekend and chatted, bought rare and unusual vinyl, and talked about all things record-related. Turntabling is plotting more convention appearances even as I write this. Everyone who came to the table really made the weekend special–THANK YOU for your support.

I wanted to take a moment to remind people that I am currently in search of more record collections to purchase. Any kind of bulk vinyl for sale is potentially of interest as I have a continuous need for more titles–especially 80s goth/industrial, soundtracks, new wave, odd/bizarre and otherwise unclassifiable records. Feel free to get in touch about any vinyl you might be interested in selling: jwallace@turntabling (dot) net.

Thanks again for your continued support! 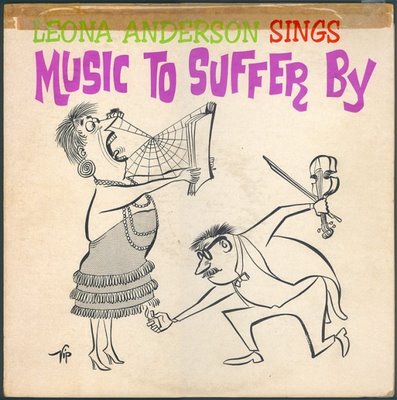 I stumbled on this image of the album cover for Leona Anderson’s Music To Suffer By on The Magic Whistle. WTF is going on in this picture? This one’s suitable for framing–at least in MY house where bad album art has a special place of love and reverence.

There’s nothing quite like the joys of an especially wretched piece of album art. The ones so wrong-headed you can’t even begin to describe them are my favorites. Music To Suffer By from Leona Anderson is definitely one of those. Can you hear the discussion between Anderson and the artist? “Well, miz Anderson, the guy with the violin is, you know, gonna KILL you here with that lighter as you’re trying to sing with cobwebs coming out of your mouth. GET IT?”

If YOU get it, please by all means, let ME know what this is trying to say. I think maybe I’m still drunk from a week last Thursday and that’s why I can’t wrap my head around it.

Whether or not this is actually THE largest collection or archive of records in the world doesn’t really matter…this is an AMAZING clip. This segment is only one part of a larger documentary by Sean Dunne. The whole thing is available on Vimeo.