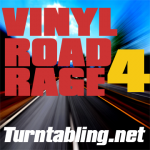 The second stop of Vinyl Road Rage 4 was another familiar shop–TD’s CDs and LPs in Bloomington, Indiana. This shop, located at 322 East Kirkwood Avenue, is a basement record store in a building with a good coffee shop and several other attractions.

It’s been running in the basement there for over ten years, giving love to local bands, selling rare and weird music and with quite a good, diverse selection too. 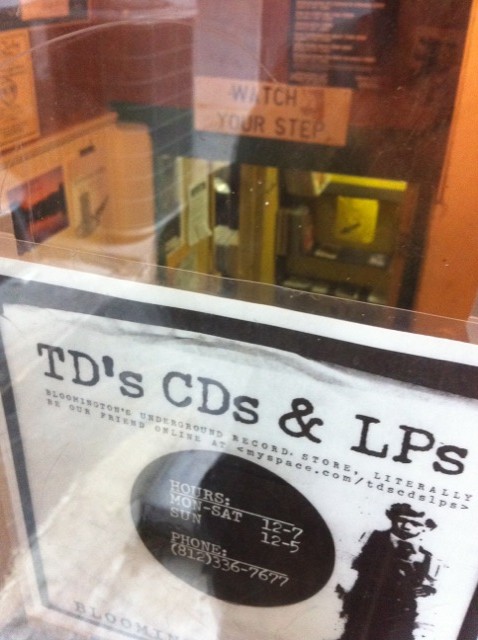 Any fan of 80s/90s electronic or experimental music should definitely have a look. Nurse With Wound is very well represented there (just one example) and the soundtrack section is crammed full of great, obscure and hard to find titles–especially Goblin. Vinyl and CDs are both equally represented–this is not a shop that has one or the other as an afterthought.

Like other great indie record shops, the notes about some of the more attention-worthy releases handwritten or printed out by the staff on stickers make the shopping experience a lot more fun and informative.

There’s something about notes written by the people who work in that particular shop that make you feel like you’re really connecting with the store overall. It’s a great touch and a habit I like to encourage.

I can’t tell you how many albums I’ve purchased strictly on the content of those notes alone, and my visit to TD’s was no exception–at least one of my purchases was on the strength of those little writeups. TD’s is friendly, fun to shop and very cozy. The fact that you can go right next door for a caffeinated jolt and review your purchases is also a big plus.

I highly recommend this record store and it’s definitely on my “must shop” list for anytime I am in the area.

Fellow vinyl junkies, why not join me on Facebook? You can also become a fan of the official Facebook page for the upcoming Turntabling.net book WTF Records: The Turntabling Guide to Weird and Wonderful Vinyl. 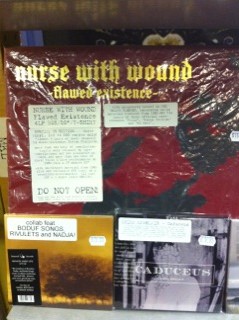 A YouTuber called Zolione76 posted this video about adventures crate digging in Chicago. The clip features Dave of the Chicago vinyl stalwart Dave’s Records, a shop I’ve long enjoyed. Dave’s is a friendly, genuine vinyl-loving shop and if you come to the Windy City you owe yourself a look there.

There is also a look at Dusty Groove Records which you cannot miss if you come here. Turntabling, being based in Chicago, is VERY spoiled with the availability of great LPs, rare stuff comes through here all the time and is definitely a destination city for vinyl in the same way as Pittsburgh, PA. 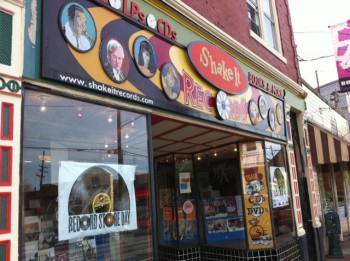 By the time Vinyl Road Rage got to Cincinnati, I was ready for something crazy. Something big, consistently good, and a little overwhelming. I’d seen big. I’d seen good. But the cramped quarters of some of the smaller shops was starting to make me feel a little claustrophobic, and the biggest shops were heavy on the new releases. In short, I yearned for a New York City style record store in terms of size and selection (not price, to be sure).

And that is EXACTLY what I got at Shake It Records in Cincinnati, Ohio. Friendly, well-lit, and a massive collection of used vinyl that forces you to cancel your plans for the rest of the morning, slow down and take a serious look. 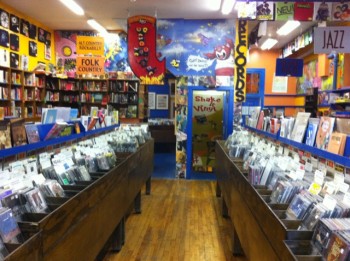 Don’t let appearances fool you. This picture shows nothing but compact discs and books–and what an AMAZING selection of books it is, too. This part of Shake It Records is deceptive as it doesn’t LOOK like a book store, but there are enough titles along the walls and above the CDs to qualify this as a genuine bookseller. But not at the expense of distracting you from why you really came here.

Like many of the most impressive New York City record stores, Shake It has a downstairs area stocked to the brim with well-organized, easy to browse vinyl. It is a bit overwhelming at first–where to start? My advice is to begin looking at the rarer titles along the walls. Behold: 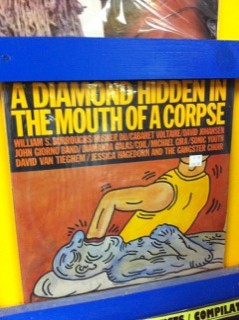 But it doesn’t stop there. The obscurities, the weirdness, all the things I love best about vinyl shopping were all handed to me on a silver platter at Shake It. 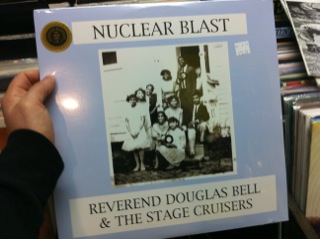 Shake It is one of those stores you go out of your way to hit, and on top of everything else, it’s located in a GREAT part of Cincinnati with plenty of indie coffee shops and restaurants nearby. It was by far one of my favorite parts of the trip and I can tell you I will DEFINITELY come back to Shake It at my earliest opportunity. This store is clearly a work of love–every single inch of the place is a joy to shop. DO NOT MISS. 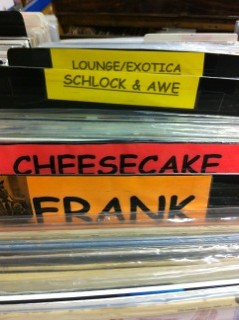 One thing I like about doing Vinyl Road Rage–there are plenty of contrasts out there. Some indie record stores are massive, multi-story affairs that are mind-bendingly tough to sort through.

Then there are the smaller, scrappy indie record stores like Underground Sounds in Louisville Kentucky. They generally don’t take long to shop for a dedicated crate digger, but they do often yield plenty of rewards.

Underground Sounds, like many similarly-sized indie record stores, has an eclectic mix of old and new vinyl, and while 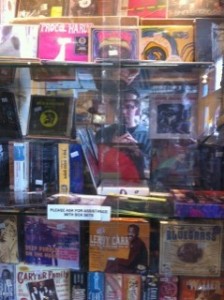 in the cold while the indie rock kids get all the attention. It’s a diverse collection. There is also a nice case crammed full of boxed sets, so collectors of these should definitely take a look.

Underground Sounds is cozy, well laid out, and easy to browse. I didn’t have a lot of time to spend here but thanks to an intelligent, customer-friendly layout I was able to get the gist of what they had fairly quickly–and that is a real bonus for short attention-span browsers, I’m here to tell you!

Of all the Louisville record stores I found on my trip, Underground Sounds was hands-down the best. Another place of similar size had nothing but grandpa rock and battered Linda Ronstadt albums, and larger spaces–while organized well–didn’t seem as fun to shop. Maybe I just like small, scrappy indies better?

Underground Sounds has my vote for Louisville Kentucky’s best indie record store for the overall experience. Nothing beats selection, organization and atmosphere combined. I’ll be back here. 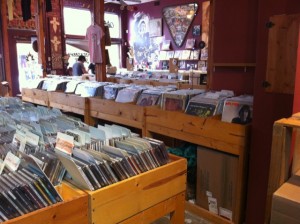