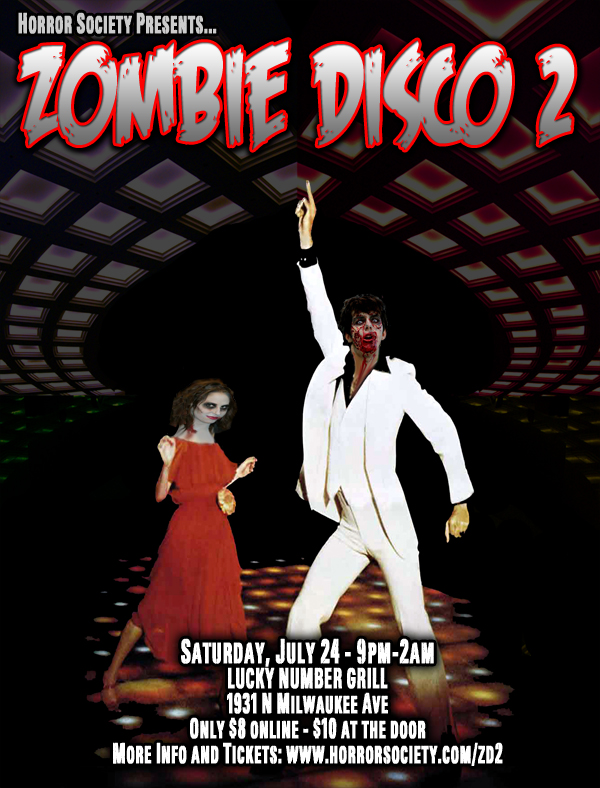 Tonight, Saturday July 24 at 9PM I’ll be spinning as DJ Paisley Babylon at Chicago’s excellent Lucky Number Grill. It’s Zombie Disco Night, an event put on by the Chicago Horror Society. Last year’s Zombie Disco was something to behold and this one should be even more fantastic. There will be zombie makeup artists on site to bring out the corpse in you, plus some fun events, contests and all the retro disco insanity you can stand. Bring a bag of disco biscuits and get your groove on!

If you can’t make it to this for some sick reason, I’ll be posting a set list mix later in the week. Stay tuned. DJ Paisley Babylon rides again, terrorizing Chi-town from behind the decks.

Many thanks to all who came out for Zombie Disco at Chicago’s Viaduct Theatre. A great time, tons of tunes, and the zombies were out in full decaying regalia. I spun for FIVE HOURS and let me tell you, that’s a musical kamikaze mission if there ever was one!

Was great to have the turnout  of what seemed to be  the majority of Chicago Horror Society members on this–the undead came out in force and were truly appreciative of the DJ disco attack. The evening started with Throbbing Gristle, ended up with some dub reggae, with a staggering collection of disco classics and obscurities thrown in between for good measure. I really enjoyed mashing up Throbbing Gristle with German disco sounds in the beginning of the set.

This site has been a bit sleepy as of late due to massive work, but we are still breathing and prepping for a new massive attack of vinyl-related goodness. Stay tuned. In the meantime, special thanks to the Horror Society crew and all who attended to make the Zombie Disco night a great success!

Here are the gory details I promised earlier about the Chicago Horror Society birthday bash, Zombie Disco. I’ll be DJing this on Saturday June 20th at the Viaduct Theatre. Admission is a mere ten bucks for all the undead fun you could ever want, plus Italian horror movie soundtrack sounds mega-mixed with disco and other craziness. Expect to hear Goblin mashed up with Daft Punk, Lipps Inc, the Cramps, Morricone mashed up with Aphex Twin, James Brown and Paisley Babylon.

Check the flyer for all the deets and don’t forget to wear your zombie makeup! 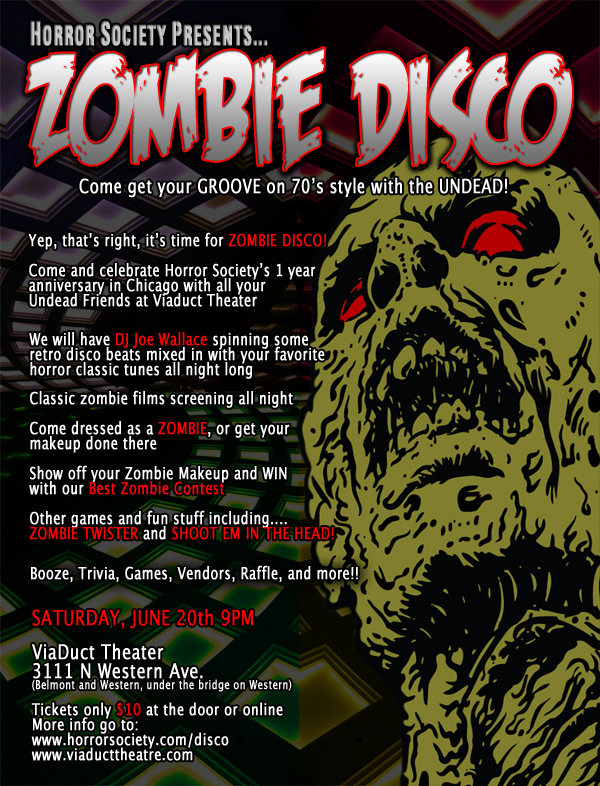