A driving, psychedelic piece introduces the soundtrack for The Living Dead at Manchester Morgue.  The lively first track of this album (John Dalton Street) is named after a street in Manchester. Building over the film’s opening montage of motorcycling out of London to the title’s location, this piece seems more like a backing for a caper flick.

Only when the second cut (Surreal) hits the needle, does one realize something is wrong with the vibrant life of the first track. The tone becomes uneasy. Low groans and whimpers seep into album.  Echoes and laughter bring chills to spine.  When the John Dalton Street orchestration returns, the sinister has taken over. What has happened?

Murders happen in this movie. The police suspect a couple of outsiders, with devil worship as their motive.  The actual culprits includes the unborn, the recently deceased, and the government’s latest idea for pest control.

As an individual experience, this soundtrack is amazing.  Death Waltz Records released a Vinyl LP of The Living Dead at Manchester Morgue that any fan of the movies and soundtracks should seek out. Composer Giuliano Sorgini, horror expert Steve Thrower, and cover artist Luke Insect provide the liner notes.

Turntabling has a copy of The Living Dead at Manchester Morgue Vinyl LP for sale on Discogs.com.  — first come, first served. 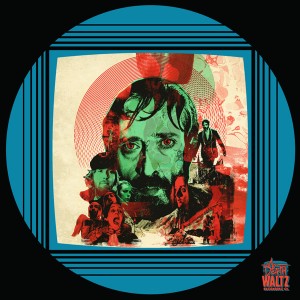 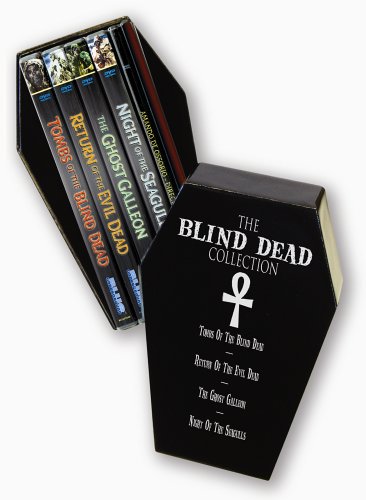 The Blind Dead series is a classic among euro horror loving movie fiends. The Blind Dead Collection is an amazing five DVD set includes all four movies: Tombs of the Blind Dead, Return of the Evil Dead, Ghost Galleon, and Night of the Seagulls. Thrill to the sight of the undead Satan-worshipping Templar zombies rising from their graves to mutilate tender flesh…this boxed set is a hell of a lot of fun. Need convincing? Check out the trailer at the end of this post…you’ll be a convert soon enough. Or zombie food.

The fifth disc contains a documentary on the Blind Dead creator and director Amando de Ossorio, who did quite a lot with his career in horror. Naturally his best-loved creations are the ones shambling around in this great box set.

The blind dead series starts with a bang and never lets up, even at its cheesiets in Return of the Evil Dead. Some prefer the first film and the final two, but round HERE all four are considered classic zombie movies and definitely worth watching (We recommend Return of the Evil Dead after a six-pack.) The documentary disc really rounds out the collection and the coffin box  is an especially nice touch. It looks great on the mantle, doesn’t it?

This is an experiment of sorts at Turntabling. We’re offering a limited number of these coffin case DVD boxed sets for sale to see whether we should be offering DVDs alongside our soundtracks…if the response justifies us getting more, we’ll definitely add some additional titles relevant to the stuff we already carry on Turntabling.

The Blind Dead Collection is a brand new, sealed five-DVD box set. Buy it now from Turntabling for $65 plus shipping. Overseas orders are welcome but please not that this collection is comprised of NTSC DVDs intended for American DVD players and may not be compatible with overseas DVD playback devices. Purchase at your own risk. 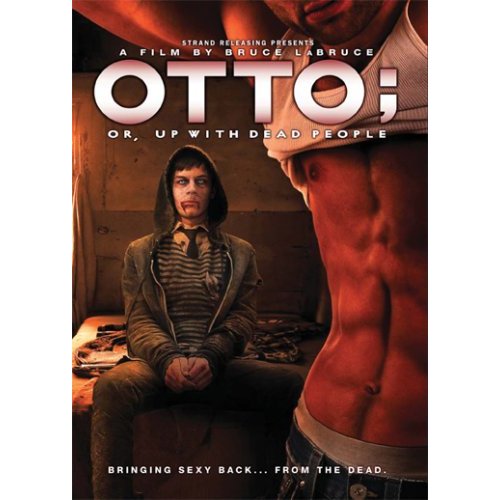 I’ve read bits and pieces about this here and there, but WTF is it? A zombie movie? A goth-zombie movie? A movie about a goth who wants to be a zombie? A gay zombie porn flick? All the above? Bruce LaBruce directs Otto or Up With Dead People. I saw the actual phrase “gay zombie revolt against consumerist society” so I have no idea what this flick is on about. But the soundtrack is available in a double vinyl set and it is chock full of bewilderingly diverse sounds. Have a gander it at Amazon.com to see what I mean. By far, The Homophobes track, “Everybody’s Dead” is my favorite thus far. But I have to say, any band that dares call themselves The Pandas of Black Metal deserves at least a single listen.

This soundtrack is available from one of my favorite destinations on the web, Crippled Dick Hot Wax who for a time were putting out soundtrack sounds, the PopShopping series and other excellent oddities…but they have evolved into something a bit different over the years. I’m just glad they’re still a going concern. Check out their nice selection of mutated music, but especially the Rare Grooves section.

In the meantime, I await Otto or Up With Dead People to see what the hell Bruce LaBruce is on about. It does sound intriguing as I’m a fan of zombie films in general and mutant cinema as well….