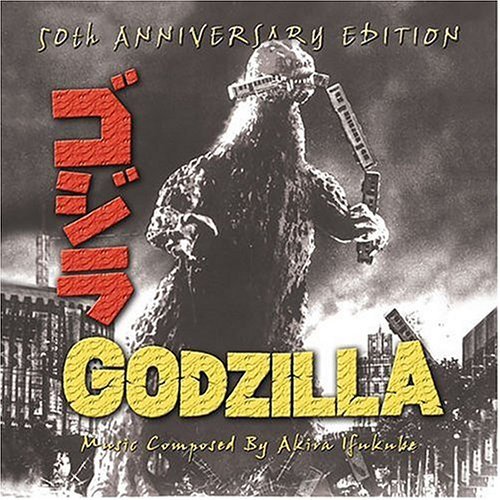 How cool was the original Godzilla? Suffice it to say, if you haven’t seen the Raymond Burr-free edition the way it was meant to be seen, you simply haven not seen this movie. Sure, we all loved the Americanized version when we saw it growing up–we didn’t know any better! But take the far more grim director’s cut, and you’ll get the real picture.

The music by Akirea Ikufube is stunning. It’s given all the attention and care that would go into a soundtrack for a Kurosawa epic. Never mind that the main attraction is a man in a rubber monster suit, the composer sure didn’t give that a second thought. The music for Godzilla is a prime example of the classic Japanese work ethic–if a job’s worth doing, it’s worth doing well.

Did we mention the opening and closing tracks have sound effects? And yes,the Oxygen Destroyer theme is here, too–a favorite round here when it comes to Big G moments.

And how! We have two copies of this awesome soundtrack, digitally remastered  from the best sources available from the Toho vault. Three cheers to La-La-Land Records for putting this out. It’s a classic.

The Godzilla Original Motion Picture Soundtrack 50th Anniversary Edition CD is a new, sealed compact disc. Buy it now for $16 plus shipping. Overseas shipping on this item is $10.