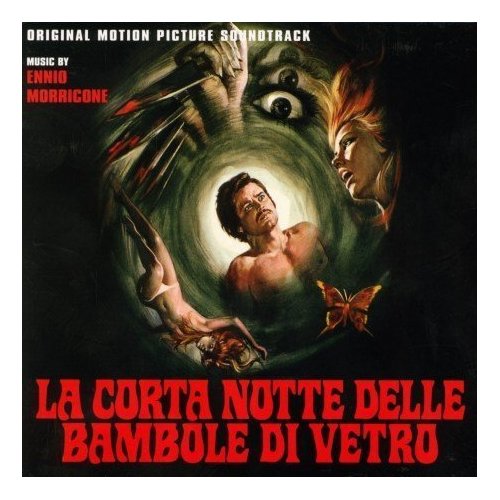 Ennio Morricone strikes again: La Corta Notte Delle Bambole Di Vetro, also known as Malastrana, and released in America as Short Night of the Glass Dolls, is one excellent soundtrack for a fascinating little film. This soundtrack has everything–Morricone’s classic dissonance and suspense-building sonic experiments, plus the vocal talents of Edda Dell ‘Orso rounding out the package.

The maestro’s genius is clearly on display on this CD. It’s true that any film his work shows up in is automatically more interesting as a result; in the case of La Corta Notte Delle Bambole Di Vetro it’s a case of a quirky Italian effort taken to a whole other level thanks to the soundtrack. The story? A man is found dead in the bushes, a victim of foul play? Maybe, maybe not, but the detective work is going on inside the dead man’s own head–he’s not really dead!

That’s not a spoiler at all, as it’s the first thing you learn as the opening of the film unfolds…the rest? You’ll have to see it to find out, but it’s a great Italian suspense film all round. You really shouldn’t miss this one. Both the film and the soundtrack are both big favorites on the Turntabling player.

Ennio Morricone has scored some of the best loved films in history, and some directors are smart enough to get him back more than once. Argento was one of those directors; here’s a collection of three great soundtracks Dario Argento brought the maestro on board to do.

An Ennio Morricone-Dario Argento Trilogy features Morricone’s work on The Bird With The Crystal Plumage, The Cat O’ Nine Tails, and Four Flies on Grey Velvet. He’s in full-on experimental mode in some places on this disc, in others he’s got the classic melodic-yet-doomy sound Morricone’s famous for. Newcomers to Morricone will revel in this, the rest of us love this because it’s an amazing listening experience.

Of the three films, The Bird With The Crystal Plumage is probably the best, but Four Flies on Grey Velvet is pretty good in its remastered form. Some disagree, but it’s a favorite here partially because of, (rather than in spite of) its shortcomings.

Turntabling has a little stock of this great addition to the DRG Classic Italian Soundtracks series. An Ennio Morricone-Dario Argento Trilogy is a new, sealed compact disc. Buy it now while supplies last for $14 plus shipping. Overseas shipping is $10.