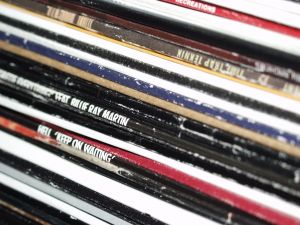 Vinyl records vs. MP3s? I own them both. Why are album versions of records better than their MP3 counterparts? The digital Black Flag vs. the original SST Black Flag recordings? Naked Raygun on your iPod shouldn’t sound much different than the vinyl record of the same album, right? Can you find Big Black on MP3? Here’s a a little list:

10.  You can’t accidentally delete a vinyl record. However, your cat may urinate on it. That won’t affect playback…unless you have friends over.

9. You don’t get the nice big cover art off an MP3 download. This doesn’t matter much for modern releases, but for those old, elaborate LP releases or soundtracks to sexy Italian horror and “sexual awakening” movies, big covers are nice. Especially for those Piero Umiliani soundtracks. There’s nothing more fun than a cheesy sexy 60s era album cover, is there?

8. Nobody tries to sue you for making a CD-R burn of some old dusty record in your collection. They’d love to try, but the RIAA would get laughed out of court faster than Rod Blagojevich proclaiming his innocence. Nice try.

7. Unlike an MP3, you can shatter a vinyl record and use the pieces to gash somebody in face when they make fun of your pants.

6. In Shaun Of The Dead, the heroes tried to kill zombies using 12-inch singles. Try doing that with an iPod and you’ll join the ranks of the undead faster than a screaming teenage girl in a filmy white nightgown.

4. You can actually clean a record album with soap and water. You can clean an iPod by…BUYING A NEW ONE.

3. Stores with high theft issues should stock vinyl. You can hide an MP3 player in any body cavity. An album tends to stick out of the most obvious places. Painful, too.

2. Vinyl records are better than MP3s because you can play them backwards and get the messages Satan wants you to hear. Try doing THAT with a downloaded version of Ashford & Simpson’s “Solid as a Rock”.

1. When you get bored, you can safely microwave an LP, put it on the turntable and play it for laughs. Put an MP3 player in the microwave and it will explode. Need we say more?