The Turntabling Collection is our ever-growing curated vinyl record collection–some of which goes up for sale to finance the site and help our fellow vinyl junkies fill holes in their collections. Here’s the latest, and don’t forget that every time you buy vinyl from The Turntabling Collection, you’re not just buying rare, hard-to-find, or just plain cool vinyl records and CDs–you’re also helping to keep Turntabling alive and kicking. Thank you for your continued support!

A double LP compilation of reggae sounds including Augustus Pablo, Herman, The Aquarians, and many  others. There’s a definite obsession with dub and reggae round the Turntabling office and this record is two slabs of awesome.

Soul Jazz presents Sound Dimension doing two albums worth of rock steady reggae. If you know Soul Jazz, chances are good that you’d be willing to take a chance on this unheard and unseen–as we did. The Sound Dimension are described as the overseas equivalent to Booker T and the MGs or The Funk Brothers–they did the same kind of daily grind studio session work. Hear them in top form here…

Richard Rodney Bennett’s soundtrack for the Michael Caine spy thriller. Some people are completely into this soundtrack, while others are completely unaware of it. It’s a bit overly symphonic in places, but the tracks Anya and Love Scene are Morricone-esque enough to get the attention of Maestro fans, and that’s good enough for us! Nice stuff indeed.

Again, when you buy from The Turntabling Collection, you’re supporting the site directly, so thank you for choosing Turntabling. There is much more to choose from, these are just some of the latest additions.

Roots Records is one of those places I KNEW I had to hit on Vinyl Road Rage. Being a longtime fan of all things dub, stopping here was a no-brainer. But I wasn’t quite prepared for how awesome this shop would be.

Roots has a tough job, catering to an extremely specialized market in a place I personally wouldn’t have picked as having a following big enough to sustain a store devoted to such a small part of the larger music-buying public.

That just goes to show you what you get for making assumptions. Columbus Ohio seems very supportive of its music shops, Roots included. This shop seems to be thriving and doing well–and deservedly so.

How awesome is Roots? For a start, toss out any notions you might have about reggae being a “small” genre. There’s enough to stock an entire store and then some without that store feeling like it’s just…missing…something. The diversity of sounds and styles will keep you crate digging for ages.

And Roots is full of surprises. The people buying for this store don’t come off any music snob factor whatsoever–you’ll find plenty of related genres and groups influenced by reggae and dub, hence the presence of Massive Attack 12-inches and much more. I got the feeling a newcomer would walk out of Roots feeling like they’d just found the secret source. 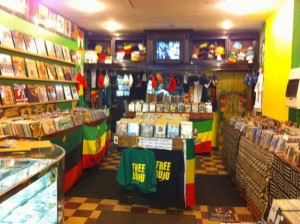 Compare that with your typical “High Fidelity” indie rock snobbery and revel in the fresh air of Roots. No pretentions, no bullshit. Just people who seriously love this music. And tons of it, from the roots reggae and dub plates all the way to what I call Generation Next dub sounds of Ryan Moore and Twilight Circus Sound System, you can get your fix here easily.

Want to fill in the holes in your Blood and Fire catalog? Check. Need to turn some unsuspecting future fan on to I Roy or grab yourself some Super Ape action? Done. My own biases are on display here–there was plenty of new-to-me stuff there, too. I just need to go back with a large bankroll and a Santa Claus-sized sack.

Roots is efficiently laid out, fun to browse, and the source of my favorite WTF moment of the entire Vinyl Road Rage journey, the random visual shock of THIS little gem hanging on the wall for all to see: 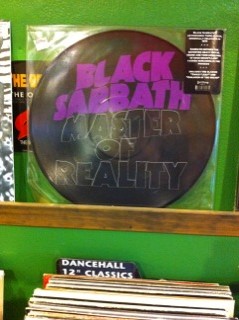 Yes, Roots didn’t need to win me over at this point, but seeing a Black Sabbath disc on the wall of this awesomely stocked reggae record store surely cemented Roots in my mind as one of the coolest places on earth. Hands down, one of the best stops on Vinyl Road Rage. Columbus has plenty of amazing record stores, but Roots has a special place all its own on the scene. DO. NOT. MISS. 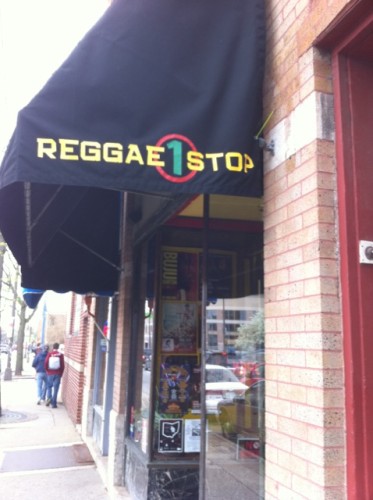 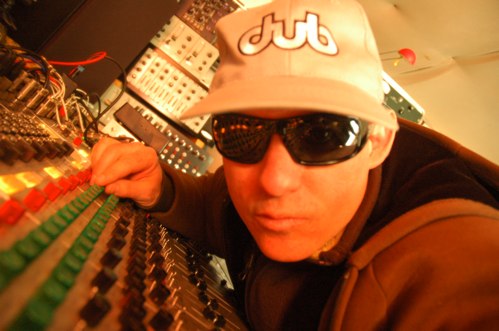 I was introduced to Ryan Moore and Twilight Circus Dub Sound System by way of the Legendary Pink Dots. Ryan Moore toured with LPD as a bassist and opening act back in the mid 90s. He would open LPD shows as Twilight Circus, playing a heavy dub act for about half an hour, 45 minutes before the Dots took the stage. With all due respect to the Dots, I thought Moore should have had his own headliner act with a more fleshed out band, but he did very well with the backing tapes, creating a great dub atmosphere with little or no help.

Moore’s site Twilight Sound System lives on today with too many dub releases to name. Check out the free MP3 downloads page and marvel at the excellent heavy grooves on offer. Moore is a dub powerhouse and a genuinely nice guy…I’d drop my plans to see any show of his. Been digging on dub for many years now and it has to be said, Moore not only carries the tradition, he’s brought elements of the old and new together with great skill. Have a listen, dubheads…if you don’t know Twilight Sound System, you’re in for a treat.