Turntabling has some new stock in, lots of Ennio Morricone goodness being added to the inventory this holiday weekend. But we are also excited to announce that we’re going to be adding more used vinyl to the inventory-a lot of rare and excellent titles from Sisters of Mercy, The Cure, Johnny Thunders, Robyn Hitchcock, Roxy Music, Romeo Void, a LOT of pre-owned vinyl coming your way soon.

When it comes to used vinyl, Turntabling takes a conservative approach. There is visual grading and that usually includes a spin on our turntable to make sure there are no undetected warps or other general issues. Our equipment isn’t YOUR equipment, so performance may vary depending on the type of needle you’re using, whether your tone arm is properly calibrated, age and nature of your turntable, etc. But we try to be as transparent as possible with our descriptions.

If there’s a noticeable issue with a vinyl record, it should be described in the listing, but Turntabling also believes in satisfaction, so if you encounter problems with an unsealed, used vinyl record you’ve purchased, do get in touch.

We’ll be updating the site when the new titles are live! You can shop our current inventory in the meantime, with hundreds of new, sealed vinyl waiting for you. 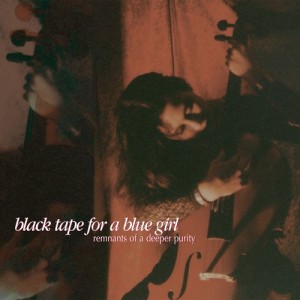 For decades, Projekt Records has been releasing dark music on vinyl, CD, and digitally. The label is home to a variety of artists including Black Tape For A Blue Girl, Steve Roach, Voltaire, Unto Ashes, Weep (Doc Hammer, co-writer of the Adult Swim show The Venture Bros.), and Love Spirals Downwards.

When vinyl hit that strange twilight zone era between CDs and digital, many record labels stopped paying to press LPs in favor of the digital option. Projekt Records vinyl is hard to come by (there’s one single, solitary Black Tape For A Blue Girl title on LP in the Turntabling Collection) but there’s a new title in the works–something darkwave fans are sure to love.

Patrick Ogle talked with Projekt’s Sam Rosenthal about a new vinyl release currently in the funding stage on Kickstarter. On the Projekt Kickstarter page, Rosenthal says, “People often ask if I am going to put out something from Black tape for a blue girl on vinyl. In fact, there was vinyl years ago for the first two albums. But that was a different era, and now it’s time for us to put out vinyl again. When I say “us,” I mean you and me; because together, we can make Remnants of a deeper purity exist on vinyl. It’s your support through the pledges (to the right) that will raise the money so this project can happen.”

Why vinyl? Why this release and why now?

It was really the fans on Facebook who inspired this. They’d been asking me about Blacktape on vinyl, and I’ve been sort of hemming and hawing: not sure if there really was a need for it. But they kept asking, and I figured, ‘why not!’ Remnants of a deeper purity was recently voted their favorite album, also on Facebook. So it seemed like the logical album to release.

Why do you think this is the best selling black tape release?

That’s a really hard one to answer. I’ve always felt that Remnants is one of the more ‘obscure’ Blacktape albums, in that it’s about forty percent instrumental and long violin/cello passages. It’s a lovely album, just not the most mainstream of my releases. It came out in 1996, which was really the peak of the darkwave scene. So it’s success might partially be due to ‘right album at the right time.’

If it were more economical would you do more releases on vinyl?

We’ll have to see about that. It’s really a question of demand. You know that people are rapidly abandoning physical formats. So this Kickstarter will help me understand the desire for my music on Vinyl. If people want it, I’ll certainly do more.

Do you think the audience for vinyl are as interested in the packaging as the sound quality?

I think so, yeah. That’s the big draw for me. I love the large format landscape of an album cover. Remnants is going to have an 8-page booklet. that’s going to be super lovely! And it’s going to include the names of everyone who pledged on Kickstarter. That’s a really nice thank you for people’s help making it happen.

Have you ever thought of doing a subscription service a la “Third Man” for Projekt?

I’ve been thinking about doing that for Black Tape For A Blue Girl, actually. With the diversity of the releases on Projekt, I don’t know if people would go for the subscription. Do the ambient fans want the Goth Rock releases? I dunno. Maybe that’s a question I should be discussing on Facebook, to see what people think.

Are you going to remaster this for vinyl? What are you listening for in a vinyl release versus mastering and mixing for CD?

I have a guy in Europe who is going to master the album for me. Anders Peterson at GS Mastering & Post is the guy Mannequin Records used to master the reissue of my 1985 minimal synth album TANZMUSIK. He did a fabulous job, so I’m asked him to do Remnants for me.

He really knows what to do, to make great sounding vinyl. What am I listening for? Well, the album was mastered in 1996. So I definitely think the technology has improved, to make it a much better sounding album. I am going back to the original DAT mixes, will transfer them to digital, and then listen for what I think needs improvement, and will send those notes along to Anders. It’s going to sound great.

The Black Tape For A Blue Girl Kickstarter to put Remnants Of A Deeper Purity on vinyl ends at Midnight on December 16th.

Turntabling presents a retro-dub/lounge-fi/electronic industrial/WTF DJ set at tonight’s Constantly Consuming Culture art show put on by Mapanare.us. The show opens at 6:30 PM tonight (September 7 2013) and is located at at 222 North Desplaines Chicago, IL on the lower level.

Turntabling and Tim Larson from Chicago’s own Tim Larson and the Owner Operators will be DJing–Turntabling set includes Ennio Morricone remixes, Italian lounge, dub, some electronic industrial, and an extended play set of Binary Partners tracks and unreleased material.

Turntabling has been involved in many Chicago art and media events including shows by OhNo! Doom! and the Paisley Babylon Beautiful Chaos project which was featured at the 2010 Music Box Massacre and in the Not The Film Room at Capricon 32 in 2012.

For more information, see the Mapanare official Facebook events page for the show.

Turntabling and DJ Paisley Babylon are available for booking for art shows, film festivals, media events, private gatherings and similar events. We have a specially curated collection of retro sounds featuring dub, Italian lounge, gothic/industrial, new wave, and unusual vinyl. This isn’t your typical party DJ experience–it’s a retro groovy/sinister flashback experience that covers a wide range of sounds and atmospheres ranging from pure chill-out to Halloween party-creepy depending on the event.

There is a TON of great new vinyl for sale on the Turntabling Discogs page. Italian soundtrack fans will love the addition of My Delicious Spaghetti Western on the legendary Dagored label, and it’s been a great long while since I had a copy of Ennio Morricone’s La Donna Invisible to offer–it’s one of my favorite soundtracks from the era. I am always on the lookout for more excellent titles from Italy from the giallo, horror, sci-fi and thriller genres. You can never have too many Goblin albums, and Morricone’s work from the 60s and 70s never gets dull.

Turntabling sells vinyl from a variety of genres including soundtracks, goth/industrial, 80s new wave and punk, and just plain rare/obscure titles. I scour the earth to find these, and several times a year embark on cross-country trips to buy entire collections, find weird and outrageous vinyl, and meet my fellow vinyl junkies.

If you have a collection to sell, I’d be very happy to discuss it–but please know that I buy in the genres that I sell here. Country, show tunes, classic rock, and other genres unrelated to what I sell on Turntabling are of little interest. The ONLY exception to that rule is when weird or unsual albums are involved.

Here is a VERY SMALL selection of what I currently have for sale on Discogs. You can always send me an e-mail for a list of my latest arrivals–it’s an auto-responder that has my very latest items listed. Just send an email to: turntabling23@gmail.com. This list is updated whenever I get new arrivals–want the latest? Just send another email to that address and you’ll have the latest updated version.

Thanks very much for checking out Turntabling! Your interest is what keeps the site going year after year.